The Soccer Complex That Became a Long Island Landmark 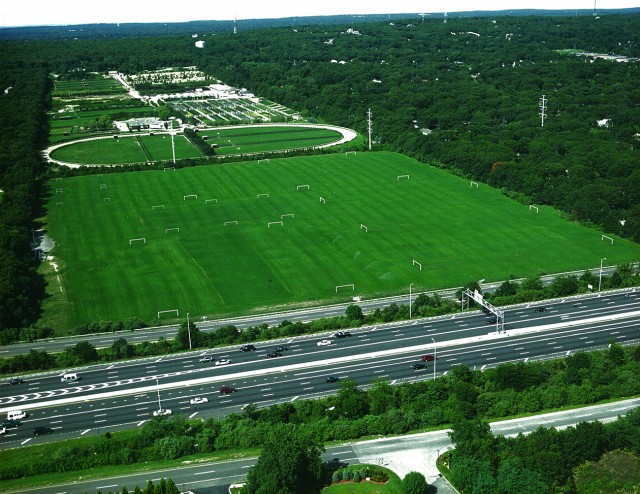 November 4, 2015-If you build it, they will come. And come they have for the past four decades to the Waverly Avenue Soccer Complex in Holtsville, whose 15 fields of dreams make up the largest soccer complex on Long Island. The fields are east of the Waverly Avenue School and a short corner kick from Exit 62 of the Long Island Expressway.

For decades, Long Islanders have been seeing thousands of kids playing there as they pass on the LIE. Wearing the gold, black and white colors of the non-profit Sachem Youth Soccer League(SYSL), the kids resemble a swarm of bumblebees chasing a soccer ball. Generations of soccer players have called the Waverly Avenue Soccer Complex home and Sachem’s travel teams play in two other non-profit organizations, the Long Island Junior Soccer League (LIJSL) and Eastern New York Youth Soccer Association (ENYYSA).

The Waverly Avenue Soccer Complex was built in 1976, just a few years after the LIE expanded to central and eastern Suffolk County. The Keibel farming family donated their large sod farm to the Sachem School District with the express intent of it being only used by the school district or community. The fields were built by volunteers led by Frank Schmidt, Sachem High School boys varsity coach at the time and a longtime soccer volunteer who was inducted into the LIJSL Hall of Fame earlier this year, and Jesse Stancorone, his trusty sidekick who became the first President of SYSL.

“School janitors hammered the wooden goalposts into the ground when the fields were built,” Schmidt commented, “The fields are so good, especially the drainage, partly because they were sod farms originally.” It costs SYSL $65,000 annually today to maintain these fields of dreams in addition to the $90,000 irrigation system that SYSL installed.

When the first games ever kicked off at the Waverly Avenue Soccer Complex, the kids played under the banner of the Sachem Athletic Club for one year before the SYSL was created in 1977. With the largest soccer complex on Long Island in its backyard, registration took off, increasing exponentially from 200 in the mid-1970s to 1,800 a decade later, which is the same number of Sachem’s registered players in 2015.

In addition to travel team and intramural players, the SYSL’s TOPSoccer Special Children have also called the Waverly Avenue Soccer Complex home for decades. The fields have also hosted tournaments as well as teams who travelled from overseas and were happy to play on some of the best fields on Long Island.

With over 100,000 youth soccer players––both boys and girls––and more than 25,000 volunteers, the non-profit Eastern New York Youth Soccer Association (ENYYSA) stretches from Montauk Point, Long Island to the Canadian border. Members are affiliated with 11 leagues throughout the association, which covers the entire state of New York east of Route 81. ENYYSA exists to promote and enhance the game of soccer for children and teenagers between the ages of 5 and 19 years old, and to encourage the healthy development of youth players, coaches, referees and administrators. All levels of soccer are offered––from intramural, travel team and premier players as well as Special Children. No child who wants to play soccer is turned away. ENYYSA is a proud member of the United States Soccer Federation and United States Youth Soccer Association. For more information, please log on to http://www.enysoccer.com/, which receives nearly 300,000 hits annually from the growing soccer community.